Real Talk:  I love what I do.  Sports’ officiating is not only a fun job, it’s an important job.  Whether the games are played by little kids, teenagers, or adult men/women, the officials play an important part in managing games that mean a lot to its participants.  They uphold the integrity of live competition.

As a fan of sport, and a former participant as a youth and adult, I understand the fun, the passion and the intensity when competing.  Often part of the art and drama of sports is the give and take between players/coaches and officials.  Some try to bully officials.  Some are more cunning.  I welcome some give and take because it’s a part of the game.  I expect players to gripe a little in the heat of battle.  I expect coaches to try to ‘work’ me into giving them the next call to their advantage.  Games are as much psychological as they are physical.  You have to have thick skin in this business to be successful as a competitor or official.

Still, every once in a while I find it funny how some of the players and coaches I work with take the give and take a little too far.   Most good officials take a lot more than they give in the first place.  We can’t get caught up in too much conversation even as we try to respect dialogue.  There are times when the chatter I hear is ridiculous.  The verbal assaults can clearly get out of hand.

While doing men’s basketball game recently one team in particular whined and bitched throughout the entire contest.  Several comments were made not only questioning our abilities as referees, but also our character.  Two of their players ended up being tossed from the contest.  And even after the game they persisted to make excuses for the ass whoopin’ they just endured.

But what if the tables were turned?  What if there was actually equal access to criticize?

I posed this question to one the whining players who kept at us as my partner and I were changing to leave the gym.

“You know what?   I can do what you do.  But you can’t do what I do.  You’re not qualified to do my job.  But what if I in the course of the game could talk to you the way you talk to me.  What if I critiqued your every move on this court, your missed shots, turnovers, every time your man scored on you?  What if I walked up and down the court saying, ‘What a lousy pass that was?  Your defense is shit.  You can’t shoot so why do you continue to try?  Coach, your game plan sucks and you can’t coach worth a damn!  Hang it up!’  Believe me I see it every week!  It’s not like I don’t notice.  But you spend so much time critiquing my every call or no call.  He had no answer for that.

I’m umpiring a youth fall baseball league in a well to do area.  Some of the kids on the teams are sons of St. Louis Cardinals, Rams or Blues players.  Some of them are pretty good while others not so.  Some of them are good kids who love to play the game.  Some think they are automatically following in their father’s athletic footsteps.

Anyway, I’m behind the plate and this one kid has Albert Pujol’s stance down to the tee.  (Not Albert’s son) He’s posin’ it real good but refuses to swing unless the ball crosses the middle of the plate.  I’m calling corner strikes and he’s huffin’ and puffin’ openly showing off his disapproval.  Later towards the end of the game, one of his teammates ducks out of the way of a pitch on the inside corner of the plate like it’s a missile.  (STRIKE!)  He turns and shows his frustrations with some grunts and rumblings under his breath.  Then he barks, “Hey – where was that blue?”  My response,  “It was in the strike zone that’s where it was.  Besides that, you are up 17-2.  Swing the bat and stop ducking the ball like you’re scared.”  He struck out and that was that.  But what if I said what I really wanted  to say.  It would have been pretty much the same except I would have added.. ‘Smart ass lil fucka!  Now shut yo punk ass up before I take my belt off and whip ya right here at home plate!’ on the end of it.  Here he was 11 years old trying to ‘big time’ me in front of his teammates and the fans.

Fortunately, for the most part I’m good at holding my tongue while managing the game professionally.  Every now and then I still lose my tempter.  I’m working on it.  But I bet for those kids/adults who act a fool, if officials can just have one contest where the talking was equal, they would choose their words much more carefully.

It was June 5, 2010.  My son Christian had just graduated from East Paulding High School in Dallas, Georgia.  The ceremony, held outdoors at the athletic field was hot, crowded and awesome.  It seemed like more than a thousand graduates.  Caps and gowns covered nearly the entire field.

Soon after the festivities, I told my son Alex (one year younger than the older graduate), “Just think, this will be you next year.  And you will be wearing the white robe and sitting in the front where the honor students sit.”  Alex said, “Well dad I don’t know about that.”  I assured him that there would be no doubt.

Alex is my fourth of 5th biological children.  And it seemed as each one began to grow up, I became a better father and a better teacher.  I don’t know if I helped my two elder daughters at school much at all, other than to offer encouragement and help with a homework assignment or three.  Not that I wasn’t interested.  I went to parent teacher conferences, showed up at whatever activity they were doing, and followed up on all of their progress.  They were motivated young women in regards to their primary education.

Charelle, for instance, was always a “Five-Tool” type of player. (To borrow a sports analogy)  She was excellent in math, science, english, reading, art; you name it.  I recall checking on her progress with her teachers in high school.  One teacher in particular looked at me and said, “You’re Charelle’s father right?  Don’t bother wasting your time.  Nothing I can tell you about this girl.  She’s got it!”  In addition, she was tremendously popular too; something I never was in any level of schooling.

Chrystal, talented in her own right, I recall being especially great at art.  My biggest challenge with her was fighting over what items she created that I could keep for myself after the art exhibits.  I wanted them all.  She was also popular and was able to hang with literally any crowd and thrive.  Something I also could not do at her age.

Back to Christian, he was always a decent student.  But he seemed to thrive more on the creative.  He could get an A in any given class if he wanted to; if he was interested enough.  What was really impressive about the time of his graduation is that his journey was featured in a local newspaper detailing what it took for him to graduate overcoming many obstacles.  Oh and did I mention, he too was very popular among peers.

By the time I had any clue of what I was doing to help with my kid’s education; since Charelle and Chrystal were already accomplished, my focus was on Alex and Christian during their latter school years.  While I wasn’t sharpest knife in the drawer and half of the work they did was way past my expertise, I focused on what I was good at.  Simplifying the process and helping them to see the big picture of life lessons and personal accountability.  These are what I would offer them:

Thus were the abiding principals I would hammer home regardless of the situation or circumstance.  Every year we would have long conversations revolving around these somehow. I tried to capture their imaginations.  I wanted my sons to envision themselves as adult men in life, not just boys in school.  Most times I couldn’t tell what they thought of it.  And I didn’t spend too much time wondering.  I felt I did my job and gave them what I had.  Ultimately they had to decide for themselves.

Then it happened on May 30th 2011.  I’m back at East Paulding for Alex’s graduation.  The ceremony had just wrapped up. There were several hundred students, parents and family members walking on the field taking pictures and celebrating.  Alex seemed as pleased as I was to soak up this moment.  Then he pulled me to the side and offered this to old dad.

“Hey!  Remember what you told me last year?  You said that I was going to wear the white robe, sit in the front and be an honors graduate.”

“You also said no matter what you do, always be excellent. I can’t believe I graduated with honors.  It was hard work man.  But I did.  I always listened to you, though I know most years I didn’t act like it.”

That moment for me was one of significance because it dawned on me not only how important it is for fathers to be in their children’s lives, but how important I was to my children.  That through all of the struggles, mistakes, and second guessing I’ve done as a man and a father, my presence and support in my children’s lives makes a difference.  Then I wondered what would have happened if I had not been there.  What if I never taught my sons to be leaders and not followers?  Wow, my job has been important.

I have four adult children from ages 18-24 and they are all in college.  I give them way more credit for making their own breaks and striving for their own goals than anything I’ve done for them.  I give credit to their mothers who were there day in and day out.  I’m very proud of them all.  With each of them as well as the ones still coming up, my focus is always to train them to be adults on their own making their own contributions.  I consider myself very blessed to be a part of their lives and being able to witness their transformations. 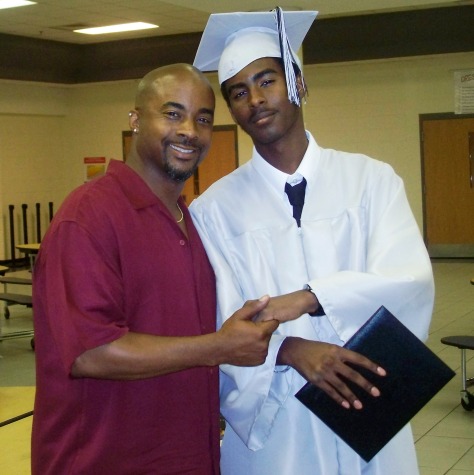