Upon hearing that today is the 70th Birthday for the (Greatest of All Time) Muhammad Ali, it reminded me of the evening that I was honored to spend with The Champ.  The year was 2005 and the occasion was “The Butterfly Ball” in Atlanta, Georgia.  The event was a fundraiser for The Ali Center, a museum dedicated to the career and humanitarian efforts of Ali that was being constructed in Louisville, KY.

Before I go further you have to understand what Muhammad Ali meant to me growing up in the 70s.  As a child there were two celebrities that I looked up to.  Muhammad Ali and then Sugar Ray Leonard.  At the time I was too young to understand Ali’s political and heroic defiant stand against participating in the Vietnam War, and I wasn’t necessarily a boxing aficionado.  But what I did recognize was Ali’s charm, confidence, star power and unapologetic boldness in public at a time when many black public figures wouldn’t dare.  Inwardly I knew he was making a place for me and his persona gave me a definite sense of pride.  Muhammad Ali to me was so significant that he was almost legend and unreal; An ethereal figure on television that may as well have been from outer space in terms of what I felt was my chance at ever seeing him face to face.  That feeling never left me even as I grew older and cried when he lost in humiliating fashion at the of his career. 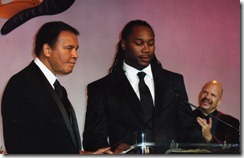 The event was star studded and included people like Cornel West, Jesse Jackson, Al Sharpton, Andrew Young, Tom Joyner, and many others including former Heavy Weight Champion Lennox Lewis, who gave $2 million of his own money because of the love he has for The Champ.  Brian McKnight had a trio set for the entertainment.  The week before making the trip to the ATL, I called Ali’s people and asked if there was a chance that I could meet The Champ and get a photo.  The woman on the phone told me that Ali hadn’t been feeling well as of late, but when he is generally he’s very generous of such request.  I hoped for the best.

After dinner and music, several speakers came up to talk about what Muhammad Ali has meant to them.  The most touching was probably Professor West who couldn’t hold back his tears as well as Ali’s daughter Lala who also tearfully recalled so many occasions where ‘daddy’  loved and cherished her and her siblings.  I was about 25 feet from the podium in awe. 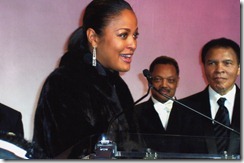 Finally when The Champ got up, he struggled to stand and speak but offered several jokes and took assorted pot shots and the people he loved.  Except for the laughs the room was totally silent as he spoke.  He was a total hoot.  When he finished and after he exited the stage I wanted to get a hand shake and possibly a photo.  The celebrities were getting theirs in and I was sort of intimidated to step in.  But then I thought to myself, “It’s now or never.  To hell with it man get in there!”

So I made my way through the big shots and tried to approach him.  He had a handler with him and I said, “Is it ok if I take a picture with The Champ?”  The handler said, “The Champ is tired and we need to get him out of here so he can rest.”  And this is what I’ll never forget…what gave Ali the beyond the universe status with me.  He heard me and pushed his handler away motioning me to come close to him.  I shook his hand and said my peace in his ear, then needed to get this photo taken quickly.  Over my right shoulder is Mayor Andrew Young.  I said, “Mayor would you mind,” handing him my camera.  He smiled with enthusiasm and said, “Sure.”  And there struggling to stand on his own The Champ made two fist and took that damn picture.

A few seconds later I looked at the camera hoping to God that the mayor didn’t screw up my photo and there it was.  I stared at it.  A photo of me and Muhammad Ali.  I thought back to my childhood and all that he had meant to me and thinking how untouchable I thought he’d be.  It was surreal as if time had stood still.  All I could think to myself was, “That’s freaking Muhammad Ali.  That’s freaking Muhammad Ali!”  Talking about ‘floating like a butterfly….’

If he had went on his way without taking the photo I still would have felt blessed.  It would have been all good and I would have understood.  But the fact that he pressed his way and didn’t “big time” me as just another cat he’s met out of millions, I will NEVER FORGET THAT!

For this reason as well as the many others are why he will always be The G.O.A.T. to me! 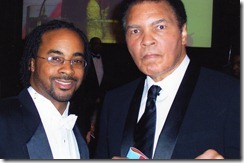