Sacred Cow: (an idea, custom, or institution held, especially unreasonably, to be above criticism (with reference to the Hindus’ respect for the cow as a sacred animal).

Sometimes I get a lot of flack for not worshiping sacred cows. I’m a 52 year old Black man from East St. Louis, Illinois. I have my sensibilities for sure. But I’ve made it a practice to check them before drawing harsh conclusions. In other words, I value substance over style when it comes to the real issues facing Black folk or Americans for that matter. One of my favorite words is ‘nuance,.’ defined as (: sensibility to, awareness of, or ability to express delicate shadings (as of meaning, feeling, or value)

Nuance isn’t a refusal to point out black and white facts. It is understanding time, place, circumstance and relevance when it comes to discussing a particular matter. A rule of engagement. Nuance requires work and intellectual honesty. Not an easy thing in society. In my community we experienced this with our discussions on Bill Cosby. Many of my people could not wrap their heads around accepting that a man who provided so much entertainment along with his America’s Dad image could do the things he’s been convicted of doing. Others just didn’t care. Because he was a Black icon of sorts, they considered him to be the victim. Now we are having this same debate with R. Kelly. Some of us are appalled and disgusted with what we’ve heard in the streets over the years. The Lifetime series brought a scathing in-depth look that I found hard to stomach. Yet I’m pushing back on Black people who feel Kelly is the victim. Some are once again bringing up White men who are accused sex abusers or pedophiles as a reason to let the ‘Pied Piper’ escape our judgment. I call bullshit on it all! Nuance say’s we can recognize talent without lying about the dastardly deeds of the talented. I’ve had conversations with friends over the years and we agreed on this premise: R. Kelly knows how to make a hit. The numbers back that up. With this additional information, it is also evident that this talented individual is a narcissistic, manipulative, and predatory human being. How one chooses to compartmentalize this dynamic is up to them. Long ago I refused to listen to his music. If someone else chooses to, it’s their right. But I don’t want to hear shit about what White people do as a reason.

This article isn’t about R. Kelly, however. It’s about people and their sacred cows. Each group whether by race, religion, gender, or sexual orientation all have them. There are none that are irredeemably flawed, nor pristinely perfect. I’ve criticized Black and White folk, the LBGTQ community, PETA, Christians, Muslims, Atheist, Democrats and Republicans. Why? Because sometimes folk just be doing too damn much! It’s the nature of having humans in your group. Show me a group that doesn’t need to be ‘checked’ sometimes, and I’ll show you a big fat Moo Moo that needs a ceremonial machete.

One group that seems to escape the blade in these United States are my Jewish brethren. I’m not talking about from Right wing extremist who hate Jews for the sake of hating them. I’m not talking about The Nation of Islam or Louis Farrakhan. I’m referring to the mainstream activist groups who seem to be the gatekeepers in suppressing voices and opinions which they do not agree with. In the latest example I site The Birmingham Civil Rights Institute in Alabama. In September of 2018 the Board of Directors elected to give it’s annual Fred L. Shuttlesworth award to political activist, academic and author Angela Davis. In December, The Southern Jewish Life Magazine criticized the museum citing among other things Davis’ critique of Israel’s treatment of Palestinians. Soon afterwards, the Civil Rights Institute not only rescinded the award, it cancelled the gala altogether.

I call bullshit on these actions on so many levels. First on the Birmingham Civil Rights Institute for allowing someone outside of it’s community to tell them who to honor, but I’ll get back to that.

Before I go on let me start prefacing lest I be labeled an anti-Semite. If I have a friend from Palestine I don’t know it. I do, however, have several Jewish friends, one with whom I am very close. I’ve worked at Jewish Community Centers in two different states for over 10 years. My experiences and interactions with Jews have been on par with any other group of people. Politically speaking, I didn’t have anything to do with Israel becoming a state, and I certainly do not begrudge it either. For the sake of peace and human decency I am both pro Israel and pro Palestine. As the region goes, there has been dirt done on both sides. The history is centuries old and extremely complicated. Often, the players making the decisions are evil power hungry people. If an Israeli or Palestinian leader is not a radical, his own party is subject to oust him. Logic tells me because Israel has the most funding, assets, weapons, and technology – (especially from the United States) they tend to get better press and empathy. The White Evangelical movement is also an ally. On the other hand, Israel is surrounded by countries that hate them. Some for perhaps ‘legitimate’ reasons and some over religious bullshit. But I digress. Hopefully you get my point. I don’t proclaim to be a scholar in these matters. But I understand a little history and the human condition.

Recently, LeBron James used Instagram to make a statement about his competitive drive for success. He used a rap lyric from 21 Savage, “We been getting that Jewish money, Everything is Kosher.”

In the art of Hip Hop, lyrical gymnastics and word play are clever ways to describe narratives and make points. In the eyes of James and Savage, everything about that lyric was complimentary to Jews – something to aspire to. It was not to imply a hyperbolic narrative that every Jew has generational wealth. Understanding nuance, I posted to my Facebook page that LeBron was right to apologize – simply because as a Non Jew he can’t tell them what to be offended by. I realize that all Jews were not offended. I know of many who were not. But for those who were there is nothing wrong with owning the offense and correcting it.

The reason some Jews were offended is because they feel the words ‘Jews and money’ reinforce stereotypes of Jews controlling the media and or the world. It’s part of the narrative that fuels anti Semitic hate among people who wish them harm. I get that. And my message to Jews is this: Do you want to know how to dispel the myth that Jews run the media and control the world? Stop pressuring groups like the Civil Rights Museum on who they should honor!  Otherwise, you are in effect doing exactly what you hate being accused of; manipulating an organization, people and process that has nothing to do with you.

Listen, when people like me say they are pro Palestine having a peaceful homeland, they are not saying to hell with Israel! Protecting yourselves is expected. But don’t act like everything Israel has done in the region is right! Israel has as many hard asses and goons as any other group of people.  Don’t even get me started on Benjamin Netanyahu. Bibi has plenty of shit in his own game. But speaking against his criminal actions should get me fired or disqualify me from an award or a speaking engagement? (Like CNN did Mark Lamont Hill) GTFOH! Since I’ve worked at the Jewish Centers in St. Louis and Columbus, I’ve witnessed all kinds of programs for writers, performers, intellectuals, scholars, and so on. I have never heard of a Black organization trying to get them to shitcan one of your guest. What gives you the right to propose shitcanning one of ours?  If you don’t like Angela Davis, don’t invite her to your programs! If you care to see where she’s coming from, engage her, or set up a meet! I believe you as proponents know where she’s coming from. And if she doesn’t say Israel can do whatever the fuck it wants and damn the Palestinians, then you got beef with her. You overstepped your bounds! This isn’t the way to make friends out of the Black community. 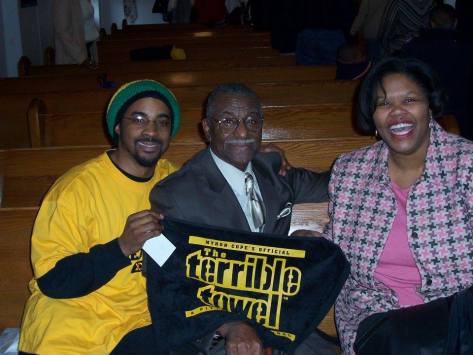 And to the Birmingham Civil Rights Institute; you guys are cowards! I don’t know if it’s about the funding or something else. But at some point you have to learn to stand on the legacy for which you claim. You wrote in your statement that “..we believe this decision is consistent with the ideals of the award’s namesake, Rev. Shuttlesworth.” But that’s bullshit! Fred Shuttlesworth was a personal friend of mine.  I’ve had days and days of conversations with him about the movement. He personally told me all the details of when his home was bombed by the Klan. I’ll tell you one thing about Fred. He was politically savvy but not politically expedient! He didn’t compromise with any sort of foolishness! So don’t put your decision to diss Angela Davis on him! You own that shit yourself! Angela Davis is an ICON in our community! For decades she has given her life to the righteous cause of black people. Fred would absolutely honor her! You missed out on a great opportunity! And your lack of integrity is disgusting! Shame on you!

Ice Cube said almost 30 years ago, “Cause you can’t be the Nigga 4 Life crew – With a white Jew tellin’ you what to do!”

Shoutout to Jewish Voice for Peace and other Jewish people and organizations for supporting Angela Davis!  We know you are out there!

One thought on “Blacks, Jews, Civil Rights, & A Banana in the Tailpipe”