On Sunday we had our meet, greet, and practice session for the World Record Baseball for BackStoppers at T.R. Hughes Ball Park. (July, 3 – 5) I got to meet the guys and we discussed what our 60 hour baseball game will look like logistically and otherwise. It’s going to be a great event in of itself. Not to mention the Heritage Festival and 5K run event that will be going on just outside the ballpark during the 4th of July week.

What was most significant however, is that we got to meet some of the people whom BackStoppers assist. 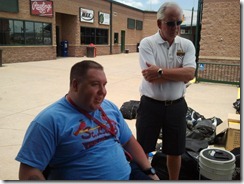 First there was Matt Crosby. Matt was a police officer in Rock Hill who was shot while investigating a domestic disturbance in 2010. That shooting has left him paralyzed and wheel chair bound. Matt told us about how Chief Ron Battellle (Exec. Dir. of BackStoppers) came to the hospital to present him with a $50,000 check shortly after he was injured. Since the incident BackStoppers has been in lock step with Matt and his family so that he has not had to worry about medical and living expenses..

Second there was Julie Weinhold and her four children. Julie’s husband Officer Eric Weinhold was killed in the line of duty in 2000. The BackStoppers allowed Julie to raise her children at home. This has been such a blessed investment as the two older boys are now in college and the girls thriving in high school.  BackStoppers has been so committed to this family, that even after Julie got remarried and her husband was laid off, they continued to assist assuring that their family continues to move forward.  This is what I call COMMITMENT to the sacrificed.

As excited as I was to play this game and support this cause, meeting these great people just fired me up all the more.  Chief Battelle (a retired 40 year police officer) couldn’t even introduce Matt and Julie without breaking down in tears.  Helping these officers and their families is a serious mission for this man.  His compassion is contagious and his spirit strong.  He told us that there are 56 other cases right now just like Matt and Julie’s that are being supported.

I share this because I want to let you know how much BackStoppers has done for our community.  Police, firefighters and EMT workers are vital to our safety and security.  To know that there is a community organization that supports those who have made the ultimate sacrifice is heartening.

I noticed something else too by the way.  Of all of the players and organizers that I saw on Sunday, I was the only person of color.  This is especially significant because BackStoppers does not discriminate against those in need.  All who are served within our community should give back and support those who serve us.  I have no problem representing my community.  I would like to ask those who look like me especially to help contribute to this case by donating something to The BackStoppers for this event.  It doesn’t have to be a large amount.  (Contact me via email c_mac220@yahoo.com or inbox me if on Facebook)

This is not just about the money either.  Personally, I won’t have health insurance until September.  Though there will be a medical staff on site, I have already signed the forms to be responsible for my own health risk.  My family fully supports this decision as we believe in what we are doing.

After the game, I plan to find out how I can help The BackStoppers in the future.

This is a great organization!  Let’s come together and support it!

Julie Weinhold and her children