I was late on the Scandal train.  Some friends at work got me hip to the party.  I blazed my way through the first two seasons via Netflix like my hair was on fire!   Once, my daughter came home from school and had forgotten something important in her locker.  I had to take her back.  But I was in the middle of some serious shenanigans involving Mellie at the time.  I had to pause my episode.  WTH?  I took her back like a good daddy would.  But don’t think I didn’t give her the straight business all the way there and back! I didn’t mention the show of course.  I went with the ‘being responsible’ rant instead.  #VeteranMove

Like so many, I love the show.  Shonda Rimes is a genius.  She can weave a plot and spin a narrative.  Writing good television is harder than it’s ever been before.  This is one of the reasons there are so many reality TV shows.  Not only are they cheap to produce, it doesn’t take much imagination.  Who needs a Rhimes to write a great story when you can just roll out a Kardashian, Honey Boo Boo or a Desperate Housewife in front of the camera?

When a well written show strikes gold, it creates a cult following.  Social media carries it even greater heights.  I consider myself a veteran and eclectic television show watcher.  I was Marin Tupper sitting in front of the TV set as a kid.  From Kojak and Columbo, Starsky and Hutch, and Berretta, Hill Street Blues and LA Law, The Sopranos and The Wire, The West Wing and Breaking Bad, I know good, and imaginative story telling when I see it.  The bar is higher than it’s ever been.

One of the biggest challenges for a great show with a cult following is to continue to write at the level that rocketed the popularity of the show in the first place.  Success and an abundance of praise can make writers lazy.  I’ve seen it with the best.  McNulty’s serial killer fiasco in Season 5 of The Wire come to mind.  Breaking Bad had some ridiculously unbelievable moments as well;  like Gustavo’s desert hospital on standby ready to pump his stomach after taking poison during his revenge plot.

This brings me to last night’s Season 3 finale of Scandal.  The challenge Rhimes faced, was having the ability to tie up a particular set of loose ends, while giving the viewer a taste of anticipation of what’s to come.  She had to to leave us reeling, giving us water cooler material to chop up over the next several weeks.  If not careful, the narratives can be rushed leaving the cake half baked.

This is how I viewed last nights finale:  (SPOILER ALERT)

Sally Langston’s cold blooded murder of her husband was ok.  I’ve always seen her character as a more fluent Michele Bachmann.  Her husband wanting to suddenly leave her in the wake of having a one night stand exposed with James Novack seemed lame.  But going Norman Bates on him lines up with her ambition to be president.  The fact that she called Cyrus, the man in charge of handling her political enemy instead of her own fixer didn’t make any sense.

Speaking of which, how in the hell did David Rosen’s assistant suddenly come up with an NSA link into Langston’s phone?  I knew they had to figure a way to expose that Langston was murdered.  I have no logic to explain that.

The scene at the Pentagon where Fitz and Eli went mano-a- mano was epic! The president’s insecurities made him feel desperate and powerless enough to talk sh#! about screwing Olivia; bragging about how she tasted as if Pope were a former lover rather than her father.  You would have thought it was Drake talking to Chris Brown.  Eli’s,  ‘I’m a man while you’re a boy’ rant was some of the best theater you will ever see.  It reminded me of Denzel Washington and Gene Hackman going toe to tow in Crimson Tide;  Or Pacino and DeNiro at the diner in Heat.  John Morton is one helluva actor, and Rhimes let him loose on Fitz.  As far as I’m concerned, he should win an emmy for that scene alone! 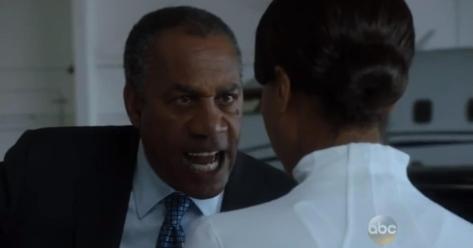 One of the reasons Eli Pope could step to the President like that was because he’s was the head of  a clandestine organization (B613) whose power exceeds that of the oval office.  This makes Pope untouchable.  So how in the hell could Fitz flip the script, put Pope on the street and make Jake Ballard ‘Command?’  Jake Ballard?  Seriously?  How does that even happen?

Speaking of B613; What is Rhimes doing with Quinn Perkins?  I get that she’s a bit looney.  But her direction started to smell the moment she got involved with Charlie and foolishly got played into killing a security guard.  Hadn’t Huck taught her anything?  Further, because Huck told her she wasn’t a gladiator anymore she then goes back to Charlie?  There was nobody else in that office to talk to her before she walked out?  Don’t tell me she’s that lost after being hard core enough to rip a GPS from her chicklets!

Lastly, the plot of Olivia’s mother being a terrorist was masterful.  The fact that her and Eli are devils in their own right is fittingly and awesomely complicated.  It makes me wonder what kind of person Olivia will be down the road.  Does she have some Eli or Walter White transformational potential?

Still, towards the end the plot became sadly predictable.  I’m sitting on the couch watching the show, and I said outloud, “That plain ain’t landing in Hong Kong.”  And, “Oh, that’s Olivia’s mom calling,” all before it was revealed.  But I’m supposed to believe she shot some dudes akin to the Navy Seals, landed the plane in an abandoned air strip in Angola and made it back to Washington D.C. by episodes end?

I’m hard on television shows.  I know it’s fantasy.  But the astute viewer will maintain a certain standard of expectation once it’s been established.  If there is too much slippage to the point of lazy pandering I will cold drop a show.  This happened most recently with Boardwalk Empire.  It has it’s share of blunders in Season 3 but it ended strong.  Season 4 was a complete fail!  The writers just started smoking crack or something.  I finished the season hoping it would recover but it didn’t.  I’m out!

I hope Shonda Rhimes hasn’t lost control of her masterpiece.  And that she doesn’t let the hype get in the way of her creative genius.