So DJ has changed his mind about leaving the Clippers, and the players are acting like The Church of Scientology refusing to leave his house till he can sign… Mark Cuban is the Biggest Loser.

This is such a fascinating story! DJ should have never had to even contemplate leaving LA. NEVER! Fact is, Doc Rivers’ lack of leadership in controlling the CP3 narrative wasting time trading for Lance Stephenson and bringing back 150 year old Paul Pierce shows his lack of competence as GM. Doc should have squashed this a long time ago. He let’s CP3 do whatever the hell he wants in spite of the fact that the dude has never made it past the second round of the playoffs.

So, DJ is courted by Cuban, Paul is on a banana boat with two cats who have rings and another that don’t, while his defensive player of the year/shot blocking/rim protector extraordinaire rides on horseback down the Rio Grande. Meanwhile, every hoop fan in America clearly understands that the underachieving Clippers are about to be the Indiana Pacers of the West; and it takes the only sane person in the organization, JJ Reddick to call Doc out saying that his off season performance as GM was an F- to get their attentions?

Perhaps Steve Ballmer had one of his aneurysms and Doc saw his rep flashing before his eyes. Lose DJ, ain’t nobody buying the Doc hype no more. Hell Blake will be out after a couple years and the Clips will be the 76ers tanking up looking for the next Danny Manning… and being the Lakers’ bitches just like the Sterling years. 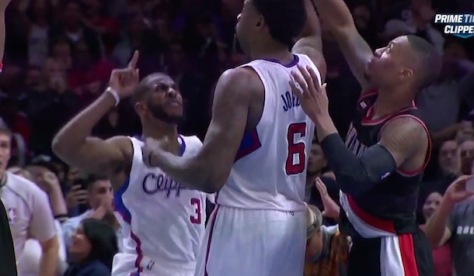 Now why in the hell do I know this and I’m just a dude on the keyboard?

I feel kinda bad for DJ. The man just needed a little love and he deserved it. If Paul were the leader he acts like he is, he would have balanced some of that bitchery with some tenderness knowing that DJ bust his ass every night and makes Paul’s life easier than it ever was in New Orleans. But naw instead of tending to his team’s business he out there riding Lebron’s jock. – Like ya’ll equals or something. Hell Lebron got his thing together in Cleveland. He got Kevin Love before he bolted. He got Tristian Thompson about to get paid! He got Mo Williams… he can ride the damn boat!

THIS is why the Clippers still won’t beat the Warriors or the Spurs. They are merely delaying the inevitable.