In the wake of the hate speech these days which I believe leads to the kind of attacks we see from “Mother Emanuel” to “Tree of Life,” it is typical for those on the Right to make false equivalence. Specifically since the bombs were mailed and subsequently intercepted by authorities to the so called enemies of 45, Minister Farrakhan’s name has been linked as adding to the rhetoric that causes such heinous actions as seen over the last week.

Here’s the truth of the matter. I’ve watched Minister Farrakhan since I was a child. I’ve seen him speak in person during a panel discussion in Atlanta. At times, he’s been a brilliant orator. He’s spoken some harsh truths regarding America and it’s history of racism, murder, lawlessness and hypocrisy. This is an undisputed truth. Equally, I’ve also thought of him as a carnival barker. In public circles he’s mild, mannerable, measured and you’d be hard pressed to find someone with more of a majestic presence. In his wheelhouse as leader of the Nation of Islam, he can be arrogant, spiteful, and totally full of himself. This is in part because of the way the organization is top downed. Go to a service where he speaks, and it’s as if he’s a messiah. You can hardly hear the message because of all the hype men shouting him down egging him on, laughing at every joke as if Richard Pryor came back to life. Like most independent preachers, he doesn’t have checks and balances in his life. He has sycophants and loyalist- many who are willing to kill or die for the man… regardless of what he says or does. 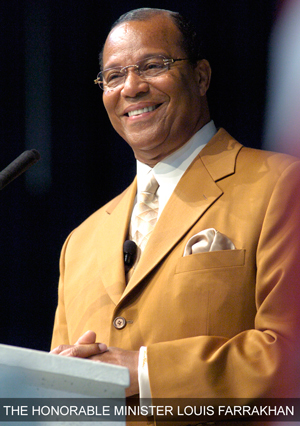 If you ask me, most intelligent black folk get this. Farrakhan is a complicated figure that way. He is an anti-Semite. If you listen closely, he ain’t crazy about Christians either. Still, if you black, you can’t honestly dismiss the good The Nation has done over the decades for black men and families. You also cannot dismiss the connection Farrakhan has had with other leaders in the Middle East. One can’t hate on his relationship with Muammar Gaddafi for instance, but name me a Middle East terrorist/dictator and I’ll show you an American ally at one time or another. But neither can you ignore the fact that Elijah Muhammad was a child molester. Of all my spiritual journeys there is a reason I never once thought about joining The Nation.

All of that brings me to this point. When it comes to hate crimes in and around the nation, ain’t nobody checking for Louis Farrakhan! Nobody is out here doing his bidding by shooting up schools, synagogues or other public places where innocent people are killed. If you ask Jim Jones, he may tell you that the Minister will scoop you up off the street for a little conversation about something you said about him. Hell he may do the same to me. But the last murder I’m aware of that he endorsed if not assisted in was that of Malcolm X on February 21, 1965. Perhaps there has been more, but none I am aware of.

So while the Right tries to Jedi mind trick the public by throwing his name out there with black elected officials who may have met with him, spoke to him or whatever, know that in terms of cause and effect in the real world, it’s all bullshit! Now when a member of the Nation of Islam shoots up a church, synagogue, school, movie theater, concert, or mail pipe bombs to Republicans then get back at me. Otherwise, GTFOH with that bullsh#! and get your fukn’ houses in order – and stay out of others!