A friend recently asked me what I thought about the NBA and Chinese kerfuffle. There was too much to text.  I figured by the time I’d get to it the story would be over; at least till next summer when NBA players make their next pilgrimage to the People’s Republic where over a billion fans await.  But a certain NBA player decided to make a public statement so it’s back to the front pages. I’m not going to offer an essay. But I will share some observations I’ve pondered of view through bullets. 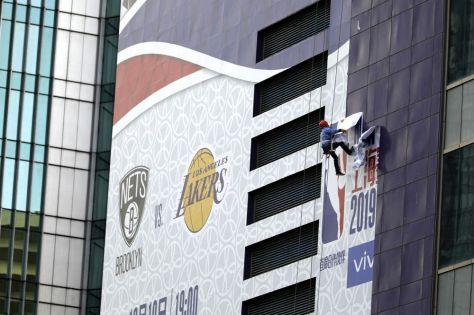 Well as Ice Cube used to say, “Once again it’s on!”

I had a good talk with my man Larry Blue the other night about this series.  I knew from Game 1 Monday night that even as the Lake Show looked flat after the week off this series was going to be a tough physical one.  This Houston Rocket team is tough and they are not going to back down.  The Lakers are no push-overs either as illustrated by D-Fish putting Scola on his ASS taking one for the team.

The refs have a tough job with this one.  Technicals were flying as fast as the words exchanged by the players.  Hell referee Joey Crawford was serving T’s like Burger King serves Whoppers…. Often.  Talk about veteran official!  And Houston’s coach had to send one of his players to the locker room in the middle of the game cause he obviously forgot who the coach was.

Kobe was Kobe just tearing Shane Battier up like Manny Pacquaio did Ricky Hatton the other night.

The Lakers toughness was definitely tested last season when they played the Celtics.  From the looks of last night’s game they have learned the lesson.

Kobe summed the situation up best.

“It’s good for us.  You have a challenge here in front of you. You want to be champions, you have to respond to it.”

This will definitely be the most intriguing series post Celtics v. Bulls!