Let me begin with a little background: I love justice, equality and the celebration/respect of diversity.  As such I celebrate the accomplishments of Martin King, Malcolm X, The Black Panther Party movement, Dick Gregory, and Paul Rusesabagina to name a few.  I have marched with Al Sharpton and was friends with the late great Rev. Fred Shuttlesworth.  As a matter of fact, I was blessed and privileged to spend a week with Shuttlesworth in his home recording his perspective of his life’s work.  If you don’t know who the man is, dammit Google him! Further I’ve identified with the rap lyrics of Public Enemy!  You might hear me blasting “Black Steel in the Hour of Chaos” on any given day.  It’s an anthem as far as I’m concerned.

I’m a vivacious reader so I am up on politics, the economy, the incarceration rates of minorities and the very common lack of justice people who look like me receive every day. I saw all this to clarify that I am a free and progressively strong black man.

With that… this is something that I read that I came across on social media regarding the 4th of July: I don’t understand why so many Black people in the United States are wishing so many other Black people in the United State a happy Independence day. Is it just stupidity? Have we really bought into the idea that we should be proud Americans? Now I think that anytime that you are able to spend with family is a good thing, fireworks are pretty and I personally like barbecued chicken. But to believe in the spirit of the 4th of July? You are joking, right?   The author of this text is Runoko Rashidi.  I don’t know Mr. Rashidi.  But this was my response to my friend who posted it.

Naw we ain’t joking Mr. Rashidi. No one is going to disagree with you that black folk were not afforded freedom or ‘independence’ in 1776. Nor are we where we need to be now. YET, I am an American. No one gets to take my part of what I give to this nation nor that of my ancestors. We built this country. We persevered, survived, and advanced through the fire and through the wall. Yes we will have a long way to go, and yet any black person who does not recognize the blessing that it is to live in a country that regardless of the racism and injustice that I fervently fight EVERYDAY has probably not visited many other countries. EVERY nation and every society has it’s issues and challenges. I don’t have to throw the baby out with the bathwater to enjoy MY piece of this pie. Perspective is everything Mr. Rashidi. Extremes and accusations of stupidity are unnecessary and counterproductive to the larger struggle. Dammit ‘not’ celebrating the 4th of July is the LEAST of ‘solving’ black folks problems in the US of A!

Again, I don’t know Mr. Rashidi.  I am sure he is a positive and loving person who loves black people.  Thus I am not attacking  him.  However, what I have noticed among some of my Black American contemporaries is a bitter disposition on life, America, our roles and responsibilities.  The above is an example.  Another example is what I see from some other Black folk who have no love or respect for President Obama.  I’ve seen in social media phrases like, “f#@! Obama and the United States,’ or other references to the effect of, “I don’t know why people are worshiping Obama.  The country is going to hell.  He hasn’t done nothing for you.”  Some even brag about not voting as if that’s makes one ‘above the system.”  Excuse me? Let’s let’s step away from the microphone for a minute. Here are a few things you need to know about politics:

1) Everything you love and hate about America is the result of politics.  Whether local, regional or national; access to clean water, food, gas/oil, utilities, roads/highways, trash pick up/disposal, the internet, wages, education, technology and so on. Politics is about power and power decides everything!  People spend millions of dollars in order to be in a position to make power moves.  Some do it by running for political positions.  Others spend money to influence those who will hold the positions.

2) There has been an ongoing movement for more than a century to deny, cheat and suppress the vote from people of color.  Regardless of the imperfections within the system, for me to voluntarily divorce myself from having at least some say is beyond dumb!   You have never heard any other group of people say, “I’m not voting because it doesn’t make a difference…”  Hell if it didn’t make a difference we wouldn’t have cases argued in courts all over America!

3) One of the greatest tricks politicians use is to get a group of people in the bad predicament to vote against their own interest because of racism, and rhetoric as to who the real enemies are.  So while we waddle in the mud over small and insignificant  bigotries, the power brokers are fleecing the nation and swinging every conceivable and possible option towards their advantage.  And yet some of us stand ignorantly, pontificating from on high about how we don’t participate in any political processes.   Ask Eric Cantor if black folk’s votes don’t make a difference! To quote the Miami Heat President we need to, “Get a grip!”

If you have F-U money like Prince you can afford to talk that, “I don’t participate in politics”, BS. (…and even HE is pissing on his ancestors who spilled blood to provide a platform for him)  But the majority of us?  Not so much! 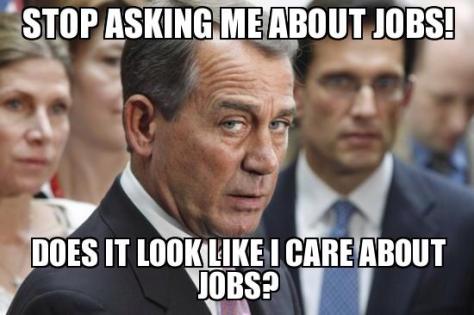 Sure the system ain’t perfect.  But the IDEAS of system are pretty damn good.  It’s people who are corrupted.  And it’s up to people to hold people in political power accountable.   It’s up to us to become part of the solution in all areas of our lives. We can’t be out here majoring on minors; allowing stupid thinking to stand in the way of us doing what we need to do in order to be the very best we can be…which includes being a vital part of every process that can possibly affect us. We have a right to be angry.  I have personally experienced damn near every basic negative effect of racism known to a black man in America;  Employment discrimination, police brutality, and so forth.

Equally true is some of my most trusted friends, allies, and working relationships are with white men, and black and otherwise.  It’s not our skin that draw us together, but our respective states of mind. We have a right to be angry.   And sometimes anger is good. It can provoke action which can provoke changes. We don’t have to agree with everyone on everything in order to do some things together.  Martin King wasn’t universally beloved.  *many black folks despised him in the midst of the civil rights movement* Neither was Malcolm.  Neither was Mandela.  Also, they were not PERFECT men.  If you dig deep enough there are several things within their philosophies, actions and inaction’s that you would quibble with them on. That doesn’t diminish their worth.  You know why they are praised now?  Because they’re dead!  Being dead excuses one from being judged based on current events, discussions and actions.  The longer they are dead, the more they tend to be immortalized and perfected.  The larger point is that people are flawed, even great people.  And so are you!

So why are black folk so hard on the POTUS.  I’m willing to venture most of his Black critics don’t know a damn thing about his presidency, what he has managed to accomplish in spite of the GOP’s racist resentfulness of his occupation of the White House.

And it ain’t like our sh#! don’t stink.  In spite of our introduction to the Americas via the slave trade, we were not in Africa singing Kumbaya when whitey came along to pluck us from utopia.  We had already done our own share of manipulating, dominating and deceiving one another too.   We fought wars among ourselves, took land and so forth.   So have the Spanish, the Polish, The Irish, Germans, Catholics, Protestants, and so forth.  It’s in man’s nature to desire power, use power, and exert power over others.   Give some of us some extra power now and see what we do with it! It’s up to us to bitch about the problems alone or become the part of the solution.

I’m challenging you bitter black man.  Be a part of the solution.  Otherwise you may want to visit places like The Sudan, Equatorial Guinea, Liberia, Haiti, Honduras, Syria, etc.  THEN tell me as you sit on your computer using the internet for Facebook and Twitter in your clean clothes after taking a hot shower eating the food you bought from the local store with the car you drove me how bad it really is.

I am an American.  This is my damn country too.  It’s only 238 years old.  Check your historical geography and you’ll realize that’s pretty damn young.  I am going to work to make the best out of it for myself, my family and my friends!  I hope you bitter black man will participate with me.  The problems may not have started with you, but you still have to own a major part of the solutions.