So many of my family and friends held our breaths trying to determine how the trial would turn out. In the words of Snoop Dogg, “Murder was the case,” was an easy call. What else would you call walking into a man’s apartment and shooting him dead while he was chilling in his drawers minding his own business? We know that common sense ain’t always common. Especially when it comes to Black people and the police.

I’m in an ongoing text group with people from the East to the West Coast. Two in particular live in Dallas. Minutes after the verdict, the Dallas guys quickly transitioned to the sentencing. The immediate suspicion was the amount of years Guyger received would be way closer to the minimum 5 year range than the maximum 99 years within the sentencing guidelines. It matched my suspicions after the September 11 attacks. When the second plane hit World Trade Center, I calmly got up from my office in St. Louis, went to my car and drove to the gas station to fill up. Sure our nation was under a terrorist attack. Still, I knew many would turn this attack into a money making opportunity. Sure enough, by the time I got off work many stations had gone from an average of $1.23 per gallon to upwards of $5.00.  America had trained me well. These men obviously received the same training. We understand the fact that most of the time cops get away with doing dirt to Black folk.

When the sentence of 10 years was revealed, the thoughts I and many of my brethren felt was familiar. “Dammit! One step forward two steps backwards!” We got the right verdict, but the jury (who were encouraged they could focus on a lighter sentence) made it so Officer Guyger received more compassion than her victim.

Immediately the media focused on the love showered upon Guyger by the brother of Botham Jean, Brandt, as well as the judge in the case Tammy Kemp. Photos of Jean and Kemp embracing a sobbing Guyger became a weird symbol of grace and mercy for a cold blooded murder in the spaces of what was supposed to be a righteous judgment. As those photos circulated the internet, reactions were strong. Many are bewildered at how a young man who lost his brother in a brutal and unjust shooting can ask to hug the woman who is responsible for taking his life. These questions deserve answers.

The reason is simple. Christianity; specifically black people’s version of Christianity. The following statements are going to seem sweeping. Those that understand nuance understand the context of sweeping terms when something is generally true without taking into account every single individual sample. Historically in America Christianity has had a dual sense of purpose and benefits. For White folk, ever since slavery, God, Jesus, the bible are all tools and symbols based in reinforcing their inherent belief that they are god’s chosen people on the earth. For Black folk, God, Jesus, the bible are tools symbolic of helping to survive being second class citizens on earth, waiting to receive the true citizenship and value they deserve in heaven. This was taught from the beginning on American soil. How else could one justify slavery and all the horrors that came with it in the first place? Slavery wasn’t just about forced labor, bloody violence, rape, splitting up of families, it was about a system of mental degradation and oppression. One wonders how you can have both the slave and enslaver share the same religion at the same time. The only way that’s possible is to emphasize a different form of core teachings as it relates to earthly vs. heavenly life. White folks taught Blacks, ‘Slaves obey your masters.’ They taught Blacks to accept; no EMBRACE their subservient place and endure whatever they had to endure. After all, the more meek, humble and docile you are, the better chance god will reward and let you into heaven where there would be no more slavery or violence forced upon you.  White folks never had to take on that perspective. They believed in receiving their benefits right here on earth as they lived. For enslavers, Jesus preserved the order. For slaves, Jesus would reward them in heaven for submissive and loving behavior towards the enslaver on earth. Black Christians spend their lives trying to get to heaven. White folk demand earth as its birthright. Heaven is a forgone conclusion.

In a way, Black folks embrace certain moral core principles of Christianity similar to how we believe in the moral core principles of The Constitution. It appears we believe in the ideas more than the ones who brought it and tout it the most. But those that gave us the constitution and to a large degree the bible never intended for Black folk to receive any of the benefits in the first place.

One key principle that black Christians embrace is that of forgiveness. We take seriously the principle that God will not forgive us unless we forgive others. As Brandt Jean took the stand to talk about how the murder of his brother affected him, he kept talking about how he hoped Guyger would receive Jesus. This is key for him because even as he attempts to grieve and process the loss of his loved one, he is told constantly to depend on his faith in god. While grappling with his pain, grief and anger, his faith tells him that god isn’t pleased with his anger. He must forgo it and give it to god. As a result there is a constant pressure or being pressed on two sides of harsh reality. On one side it’s watching this woman and her backers lie, cheat, and attempt to do everything in their power to escape justice. On the other, it’s Jesus looking down on him demanding he show compassion and mercy for the sake of his own soul. This isn’t unusual at all. When Dylan Roof took 9 Black lives at Mother Emmanuel Church, plenty of surviving members went out of their way to express forgiveness in tears and wailing to a man who detested the sight of them.  To be honest, I put myself in Brandt’s shoes. I was raised in the same kinds of churches he was. When I was his age I may have done the same thing.

Now contrast this to White people’s experiences, again they’re version of Jesus isn’t the same. So if the tables were turned, instead of touting grace and forgiveness looking to absolve the perpetrator of as much internal guilt as possible, they would simply lean in towards the calls of justice. “You reap what you sow. We have to be tough on crime and punish criminals harshly as a way to preserve order in society. The criminal must take personal responsibility for his actions. Where were his parents? Why are they as a people so violent? They must pay for what they’ve done.” This is the difference in the outlooks. Both sides were raised Christian. But Christianity and its emphasis in this area are polar opposites. Whites were never told to forgive Blacks for anything. 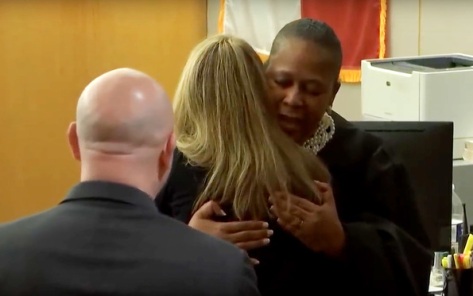 There are two basic camps among Black folk. One says, “I’m tired of Black folk doing all the damn forgiving toward Whites for the deadly shit they do. The other says, “You can’t tell Brandt Jean how to grieve. If he wants to hug his brother’s killer, then so be it.” I think the most important thing is to understand what is behind his motives and how he got there. The fact is, forgiveness is a personal decision and journey. Unfortunately, many of us feel we must display it publicly in order for it to be legitimate. I also believe we don’t really understand what forgiveness is and what it isn’t. In other words, it’s one thing to release someone from causing you pain and turning your grief into darkness. There are plenty of people I’ve had to forgive. But for some, the acts were so devious and damaging there is no way in hell we are going to be hugging it out. That is not the same as wishing harm on the person or seeking to ruin their lives. Forgiveness in this case is no less valuable or sound than Jean’s. In fact, it’s probably more sustainable.

Again, there was a time in my life I may have reacted the same way as Brandt. I grew up with his brand of faith. Now if someone took away my only sister, at worst the hounds of hell will be unleashed if I have anything to do with it. At the very least, I’m going to be like them White folks and be on the side of justice. But I digress.

What I cannot justify, however, is Judge Tammy Kemp’s behavior in also hugging the murderer in her courtroom. There is something to be said that the Fraternal Order of Police in Dallas support her. Take that how you like it. But it’s interesting that she chose to give Guyger a bible. In most cases if someone is about to do time, you give them a bible for comfort in a time of need. In this case, Guyger already received just about everything she needed. A dramatically short sentence, the forgiveness of the people she hurt in public, and oh this… she’s expected to appeal so who knows maybe the murder conviction is overturned altogether. Hell, according to the established rules of the game, she should have given the bible to Brandt.