Christian is my first born son.  I gave him the nickname Chumley.  That originated from the cartoon series Tennessee Tuxedo. Tennessee Tuxedo is a penguin and Chumley is a walrus who he affectionately calls his ‘little buddy.’  In each of the episodes Tennessee would get them into adventures exploring things inside the zoo where they lived, and Chumley would follow along blissfully.  That was me and Christian.  He was my little buddy.

I remember when we took him to church for dedication.  My boy Evan “aka Copasetic Soul” was there because he asked to stand with me when Christian was prayed over.  Evan told me, “Man, when the pastor is finished, you have to hold your son to the sky like John Amos did Kunta Kinte on Roots and say, “Behold!  The only thing greater than yourself.”   Think I didn’t?  I sure did!  Evan just lost it caught up in that powerful moment.  I still get choked up thinking about it.  It was serious!

Christian has always been a mild mannered cat.  If you don’t know him, one would think he was kinda quiet and shy.  But when he gets comfortable enough around you he is a barrel of laughs joking up something terrible.  It took a while for me to figure this out because he would always be so quiet around me.  Now he knows he can be himself around his dad and our overall communication is outstanding.

What I really appreciate about Christian is that he is a very observant and sensitive young man.  He is a student of life like his dad.  Rarely does anything slip past him, even if he doesn’t say anything at the time.  Of all of my children, he has always been in tuned with me emotionally.  At the age of 15 he would ask me how I’m doing.  After giving him some generic response he would stop me and say, “No daddy.  I mean it.  How are you doing?  How are you feeling?”

Christian knows when something is on my mind or if I am going through something difficult.  I could see his level of maturity and for the last couple years I have been sharing what I call manhood conversations with him.  Christian allowed me to feel vulnerable around him and he lets me share even my pains and weaknesses with him.  At first I wasn’t sure if he could handle them.  But he always has and has never looked at me as less than his hero regardless of what I tell him.  Because we are so in tuned with one another, I help him by articulating his feelings by language what he could only identify though feeling before.  Its not unusual to hear him say, “I’ve always thought that, but never knew how to say it.”

Some of my favorite moments with Christian were when we’d play basketball.  Not one on one, but when he would play on my team when my friends and I would get together.  I know he wanted to be down with me and my close circle of teammates.  We had played together in tournaments for years and the other guys watched him grow up.  So to see him come from being a little kid on the sidelines and playing with the other little kids to balling with the big boys, the men, I knew it meant a lot to him and it really meant a lot to me.  I would try to dominate at every phase of the game so he could see the fruits of hard work, even on the basketball court.  And it seemed like I always played well whenever he was around.  He wanted to impress me.  But I wanted to impress upon him that his dad was a true sportsman.  My theory was always, If I can beat them in what they like to do up at least up until a certain age they will always listen to me when it comes to other things in life.  I find this to be especially true with boys.

Christian is a very responsible young man.  He lives with his mom and little brother in Atlanta and is the man of his house even as I write this.  His maturity and thoughtfulness is shaping him up to be an outstanding young man.

Right now he’s really into the guitar and from the links he’s sent me he’s got some real game.  Nothing he accomplishes musically or otherwise would surprise me.  Christian has IT!  He’s got flavor, talent and charisma.

The thing I know about Christian, is that we will always be close.  Sometimes we relate not merely as father and son, but like we are boys.  I am comfortable with that because he never tries to take advantage of it.  He knows I don’t play and that I am old school.  Equally true however, is that Christian has a lot to offer me.  And quite frankly there are times when I don’t mind asking the 17 year old what his opinion is of a thing.  Most of the time his thoughts are right on point! 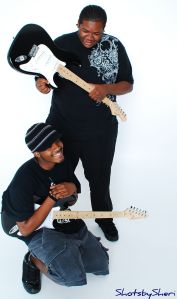 * Christian (bending) with his friend JaLil

4 thoughts on “Behold! The Only Thing Greater Than Yourself!”