It was June of this year.  School was out and my sons were to arrive from Atlanta and live with me for the summer.  Of course they wanted to see their sister and she wanted to see them as well.  I hadn’t seen my daughter in almost a year.  When they arrived they stayed at her house first because I was very busy working and preparing to give my other daughter away in marriage.  The original time I was given to expect the boys was changed by a week with one days notice.  The older sis was happy to have her brothers.  Once things settled for me I had to pick them up from her home.  Of course I had no idea where she lived.  I got the address and arrived to pick them up.

It was also the first time I saw my grandson just over 4 months old.  I only had a texted photo of him from his great-aunt.  When I saw my daughter we were both polite and courteous, though I could feel her apprehension as I surveyed her new home.  I truly felt like an outsider.  Still I made some small talk and added some jokes to loosen things up.  I let her know that she could see her brothers whenever she wanted to, and if she needed a babysitter, I was game.  This was only my 54th request for babysitting – but what the heck right?

After several months passed, finally I got an opportunity to keep my grandchildren for an evening.  Even overnight!  I was blessed to keep them on my granddaughter’s 3rd birthday.   My daughter was so glad to get a break.  She called to check on them that night.  She expressed how tired she was, how her boyfriend wasn’t helping out as much, and how much she was about to go crazy.  She sounded loose, at ease.  She talked about things about her personal life… things she would normally never tell me.

What is this happening?  Is she opening up?

I assured her that I understood.  And that there are times when a girl needs a break. I said that life is tough, and if she doesn’t learn how to balance things out and take care of her spirit, she will burn out with the responsibilities and cares of the world.  I said, “Girl look, when you need to get out, if you can’t do it on your own call your dad? Shoot you’re 21 now.  I don’t have to take you to Applebee’s.  I can take you to Café’ Eau at the Chase Park Plaza!”  (One of my favorite watering holes) She laughed and said, “I don’t know what that is.. but it sounds good to me!  I’m ready to go!”  We laughed. She said she was so appreciative that I took her kids for her, and that she really needed to hear that I was there for her.  (Something I had said for years but for the first time she heard me.  She then said, “You know daddy, we have had our times you know.”  (talking about the estrangement between us)  Then she got quiet.  And I then said, “But you know what?  That is all in the past.  It’s all about what we do from here.  I look forward to being an important part of your life, as well I need you in mine.  “Yea daddy that’s cool.  I am glad you said that.”

Since then things have been very positive.  She went from unemployment to gaining two jobs quickly.  We talk about more things now.  Not just the common stuff.  Adult stuff that she thinks and goes through.  She even talks some about her “not so cool” relationship which before was totally off limits.  Its like for the first time since she was kid, she looks at me like the daddy she needs.  Except now its as an adult not as a little kid.

The other day she sent me a text message. “Daddy, can you pick me up from work today?”  We worked out the times and from there I squeezed her in between work and a meeting I had to attend that evening.  We picked up the kids from the babysitters.  My granddaughter, who knows me well now in her surprise to see me yelled, “Hi PAW PAW!”  The older lady who keeps the children said to me, “Your daughter is really sweet.”

I got them home and went about my business.  On the way to her house she went on and on about how appreciative she was about me picking her up.  Back in the day, hell I was “supposed to do that.”  But she was so genuine.  It was like she was a new person.  She even texted me later that night cause she knew I was in a hurry.  “Did you make it to your meeting on time?”

A few days before she sent me another text.  Talking about how she was going to be getting her stuff together and for me to just watch.  She was going to be blossoming before my eyes.  Ha!  To quote Sarah Palin, “You bet she is.”  I can tell she is a new woman. It brings tears to my eyes just writing this.  Oh that she would know that I love her so and that nothing compares to her in her daddy’s eyes.  I think I’m starting to get my daughter back.  And I am thankful for that! 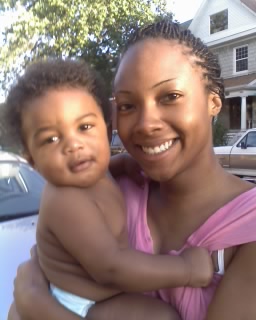 Charelle… I love you, Daddi (that’s how she spelled it when she wrote me notes as a kid)

*Above: Charelle after graduating high school with dad and her daughter Chariah

*Below: Charelle pictured with her son Cameron.  A grown ass woman!

One thought on “The Blossoming Butterfly, Part 2”